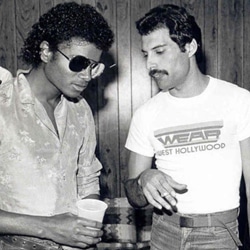 On the occasion of the release on November 10 of the compilation ” Queen forever Â»Several new titles have just been unveiled, including There must be more to life than that, a magnificent duo between Freddie mercury and Michael jackson.

The duo between Queen and Michael Jackson, There must be more to life than that, was born under the pen of Freddie Mercury during the sessions of the album “Hot Space” (1981). The band had recorded the accompaniment, but never finished the song. Freddie Mercury then visited Michael Jackson at his home studio in Los Angeles, where he recorded Jackson’s voice. The version had stopped there. Queen had reworked the title without finalizing it during the sessions of “The Works” in 1984. A year later, Freddie’s version appeared on his solo album, “Mr. Bad Guy”. This new production combines Queen’s original accompaniment with the recognizable vocals of Mercury and Jackson; it was produced and remixed by famous producer William Orbit (Madonna, Robbie Williams).

Asked about his involvement in this project, Orbit said: â€œ I have known Roger for years, and now he calls me to ask me if I want to participate in this musical adventure. The first time I listened to the track in the studio, it was like entering Ali Baba’s cave. So many nuggets offered by the greatest musicians! Hearing the voice of Michael Jackson was an intense emotion. It was so gripping, so great, so overwhelmingâ€¦ As if he was, there, in the studio. And hearing Freddie’s voice, isolated by the mixing console, only increased my admiration for his talent.“.

On this new track, the mastery of the four members of Queen It’s incredible. Roger reveals his multiple talents there, the original bass line of John Deacon and his lyrical fluidity are necessary supports. Freddie’s piano provided the majority of the song’s DNA, as Brian May’s fingers run across his guitar to provide the so typical Queen sound. As for Michael jackson and Freddie mercury, you can feel their presence on this track so much that it sends shivers down your spine.