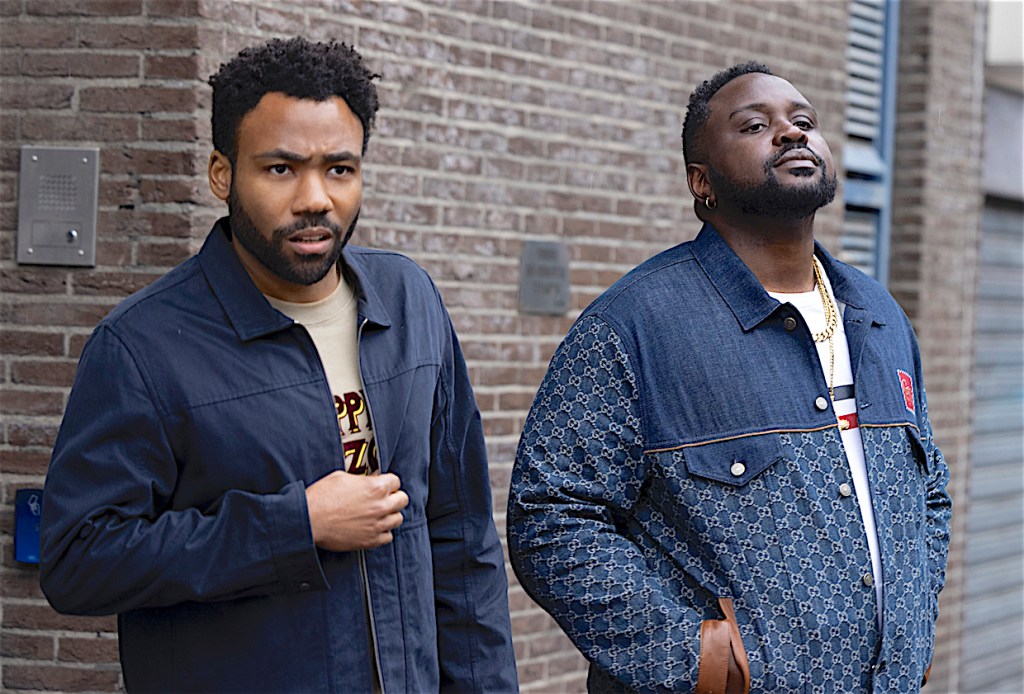 After a painful four-year layoff, Atlanta is finally back on FX – and it reminds us why it’s one of TV’s best shows.

Thursday’s Season 3 premiere is actually in two parts, and the first half is one of Atlantatrademark detours, leaving Earn and company to tell the unsettling story of a young black boy named Loquareeous entirely. After a prologue with two men fishing on a lake haunted by the souls of a black community drowned by a government-built dam, we meet Loquareeous, who plays school and is sent to the headmaster. His mother is tired of his antics and tells the school to give the child detention, and the guidance counselor sees the child’s father slap him, so she promises to “get you out of there”. Next thing we know, Child Services is on the family’s doorstep, and Loquareeous’ mother angrily throws the boy with them, with his father telling them, “Take this boy before I kill him. “

Loquareeous finds himself in a foster home with two white hippie moms who make their own kombucha and cook fried chicken in the microwave (!). They have three other black children, as well as a scruffy dog ​​named Corn Pop. They start calling the boy “Larry”, and when he complains about the food, they send him to bed early. Moms put the kids to work in their garden, take them to the farmers’ market, and use them as props to sell their wares. Loquareeous runs to a cop and tells him he’s starving and just wants to go home, but the cop laughs it off. When a black child services representative knocks on their door, she seems concerned about the state the children are living in, but one of the mothers pulls her aside for a private chat and later announces “everything is fine. good”. Suddenly, the mums pack everyone into the family van for a surprise road trip – and Loquareeous spots the social worker’s clipboard in a pile of trash outside.

The children know they are in serious trouble and the mothers have dropped Corn Pop on the side of the road, one saying to the other, “We are doing what needs to be done. They speed into the van — approaching the same haunted lake from the prologue — and look back to make sure “Larry” is there. But they only see Corn Pop. Loquareeous falls out of the back of the van at high speed just before it falls into the lake. He walks home, and his mother scoffs that he’s finally decided to come home as he settles back into his old life… and sees a news report about a trio of black orphans left on the edge of the road.

This whole story was just a dream Earn had, and in the second half of the premiere, we catch up with him touring with Al and Darius in Europe. Earn wakes up in Copenhagen and has to rush to the airport to meet Al and Darius in Amsterdam…where Al has been thrown in jail, Darius reports. The Paper Boi star is clearly on the rise: his show in Amsterdam is sold out, and when Earn asks the venue manager for a $20,000 advance, the guy doesn’t blink before handing him a big envelope full of money. He does, however, need Al’s music laptop before the show starts – which Earn apparently left behind in Helsinki. 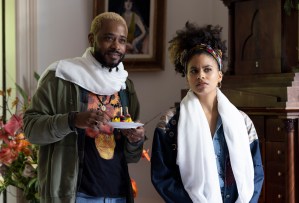 Van arrives in Amsterdam and meets Darius, telling him that she didn’t find the job she wanted and that she came here to “figure it out”. They go shopping, and when Van finds a coat she likes, she also finds a piece of paper in the pocket with an address on it. “It’s fate,” Darius declares, and they drive to the address, where a white woman tells them, “You’re right on time.” She and a group of other white-clad white people pile into the van with Darius and Van, taking them to some sort of ceremony where people mourn a man on his deathbed. Van strikes up a conversation with a “death doula” who is there to help guide the dying man into the next realm. Van appears to have an epiphany as she holds the man’s hand and tells him everything will be fine – just before the death doula presses a button and lowers a rubber sheet over the man’s face, violently choking him to death. Well!

Earn Al bails out of jail, but the jail cell is actually nicer than most apartments; Al even chooses to stay a little longer for lunch. He takes selfies with fans gathered outside the prison, and life is good – but they also spot a Santa-looking guy with a baby wearing a black face. A local explains that it is “Sinterklaas”, the Dutch version of Santa Claus who is traditionally accompanied by a helper in blackface. (“He looks like Santa’s slave, but I appreciate the brand change,” Earn says.) Al’s hotel room is ransacked, and we see what led to his time in jail: He took two girls back to his room, and they started arguing. in Dutch, getting into a vicious catfight that led to a chair flying through the window. Meanwhile, Earn has a stroke of genius: he calls one of these surgical organ delivery services and asks them to pick up the laptop in Helsinki and bring it to the scene.

He arrives on time, but Al refuses to play once he sees the crowd is full of young Dutch people in blackface. (It’s Christmas time, after all.) Earn tells him he’ll take care of it and informs the venue manager that Al is sick and won’t be performing. (He’ll still get paid, thanks to the insurance.) The guy in the room is furious and tells Earn, “I’m going to destroy you,” chasing him through the crowd. But he is confused by all the black-faced people and ends up beating up an innocent white man while Earn walks away undetected. (Thanks, Sinterklaas!) Earn returns to the hotel and says hello to Van, who looks rejuvenated after his strange encounter. He collapses in bed – only to be woken up by Al texting him and demanding “300 pieces” of fried chicken, “all legs”. Welp… a manager’s job is never done.

Was the Atlanta the first is worth the wait? Rate it in our poll, then hit the comments to share your thoughts.

Dogecoin Rally Fizzes Out: Could chatter about sponsoring an F1 team bring the coin back into the limelight? – Dogecoin – US Dollar ($DOGE)