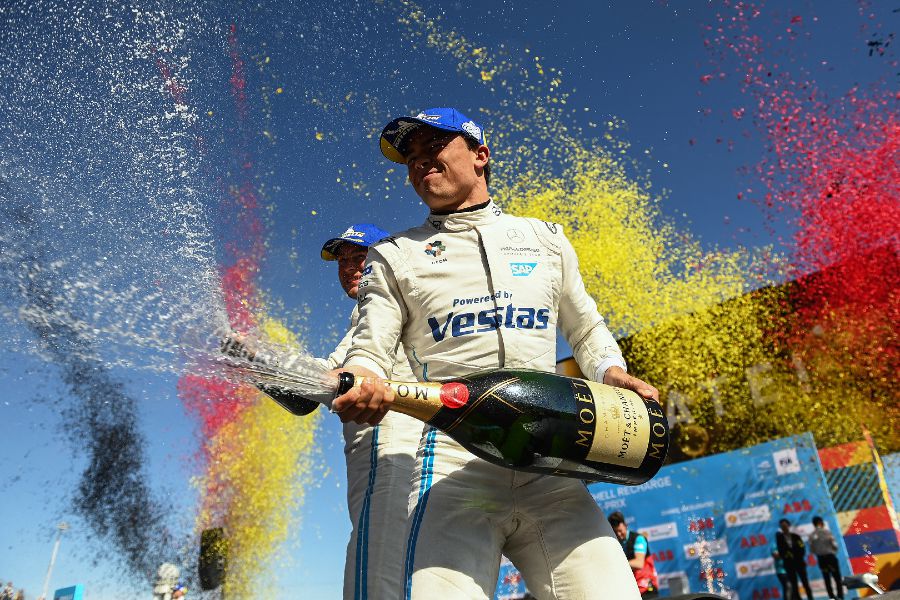 * Nyck set the second fastest time in his qualifying group and qualified for the semi-finals in the round of 16, but was eliminated by Edoardo Mortara (Venturi Racing) and thus qualified third on the grid .

* Stoffel set the fastest time in Group A qualifying but fell to André Lotterer (Porsche) in the quarter-finals. Stoffel started the E-Prix on P7 after another driver was penalised.

* Nyck got off to a fantastic start, taking the lead into the first corner from third on the grid. He then activated Attack Mode at an early stage in the race, which temporarily put him back on the pitch in P3.

* Nyck was then able to move up quickly to P1, where he stayed until the finish line.

* It was his fourth win in Formula E and his second of the season. In his 34th E-Prix start, he also collected over 200 points overall in the all-electric racing series.

* For Formula E team Mercedes-EQ, this was their seventh Formula E win and third of the season.

* Stoffel maintained his position at the start and, like Nyck, activated Attack mode from the start; Attack mode was only available once during Race 2 in Berlin, but for a duration of eight minutes.

* Stoffel fought his way through the field in the 40-lap race and secured third place just before the end with a solid overtaking maneuver against Lucas di Grassi (Venturi Racing).

* It was Stoffel’s twelfth podium in Formula E, his fifth of the season and his second this weekend. Thanks to his two third-place finishes in Berlin, he has now scored over 300 points overall in the race series.

* After the eighth race of the season, the Mercedes-EQ Formula E Team (176 points) leads the team championship ahead of Venturi Racing (148 points).

* The next round of the 2021/22 ABB FIA Formula E World Championship will take place on June 4, 2022 when the all-electric racing series debuts on the streets of Indonesia’s capital Jakarta for the ninth race of the season .

Nyck de Vries:
“What a fantastic result! The last few race weekends haven’t been easy for us, so I’m incredibly happy to have won today. It was a very moving moment for me. three races, so I’m really happy to have been able to come back after yesterday which was quite difficult. A big thank you to my engineers and all the team members for providing me with such a great car. Edo was very strong all weekend, but the team’s strategy was perfect and I was able to put it into practice. I am very happy.”

Stoffel Vandoorne:
“It was a great race for us. It was a little less action packed for me than yesterday, but still it’s great to be back on the podium. Our cars really flew again today. Qualifying was tough so after that it was important not to lose momentum and get back into the race. Two podiums this weekend, I’m very happy about that! good to be able to overtake Lucas towards the end. It’s a tough fight to beat, but I had a little more pace than him at that point and I passed him cleanly.”

Ian James, Team Principal:
“Berlin has been a pretty special place for the team since its inception. It’s where we celebrated our first-ever win, back in Season 6 – and a pretty special one: a one-two with Stoffel and Nyck And then of course, last year our season culminated with our World Championship victory in the Team Championship and the Drivers’ Championship in the German capital.That impressive streak continued this weekend: 3 podiums for the team including one in the race Mercedes powertrains also powered the top 4 cars to the finish today – Berlin will always hold a special place in our hearts and the fact that this is of a home race for Mercedes-Benz makes it even more special.

It was a phenomenal weekend for our two drivers. Stoffel looks set to qualify eighth and seventh on the grid and then finish on the podium. Simply awesome and it perfectly showed the strength of his character through the performance he put on. As for Nyck, I think today he had us all on our toes from the first corner. His passage through Turn 1 not only surprised the two drivers in front, but also us in the garage. With the team, he managed the strategy beautifully to put himself in a strong position for the rest of the race. A masterful performance worthy of a reigning world champion. Well done Nyck.

I’m so proud of how we seem to be getting better and better as a team. We’re making progress in all aspects, including confidence, but keeping our feet firmly planted on the ground – we all know there’s still a long way to go. So, although we are in a strong position after this race weekend, we need to build on the momentum we have gained so far and make sure we keep it going for future races.

Now, as much as we like to look to the future, I want the team to live in the moment and celebrate this achievement, because all the women and men from Brackley, Brixworth, Stuttgart and here at the track who work tirelessly to make this possible should know and feel that it is very, very well deserved. Kudos to you, the team! Celebrate well.”